They are tucked in the remote corner of Padawan, one among the cloud-shrouded highlands near the border with Indonesia in the middle of the jungle with no access road. Getting to Kampung Rejoi and Sekolah Kebangsaan (SK) Semban in Ulu Bengoh is not for the faint-hearted.

Trekking in the jungle crossing six huge bamboo bridges (120 ft long and 30 ft high) and no less than 20 smaller ones.. could take from four hours in good weather to seven hours if it rains and also depends on what time the journey starts. In our case, the sun set during our trek and we continued the last half in the dark. One could neither fly nor hop into a 4WD vehicle for a bone- jarring journey through the jungle.

I was invited by a journalist friend, Nancy Nais, to accompany her and Redan Ginoh .. a teacher at SK Semban, on a trip to Kampung Rejoi and took up the physical challenge of relentless hours of jungle trekking into the Borneo rainforest. To the teachers who make this journey every Friday to go home, and every Sunday to return to school, it is part of life. To Nancy and myself it was an eye opening adventure.

This predominantly Bidayuh village along with three others will eventually make way for the state of Sarawak’s water reservoir project known as Bengoh Dam Project which is due to be completed in the year 2011. While this RM310 million ringgit development project will enable the storage of about 144 million cubic metres of water, which will adequately meet the increasing long-term water demand for Kuching (the capital city of Sarawak) and its vicinity areas, it will also inevitably inundate these four villages off the map for good, once completed.

The Bengoh Dam will cover approximately 127sq km or one quarter of the Sarawak Kiri River water catchments area, overwhelming 4 villages, namely; Kampung Semban, Kpg Taba Sait, Kpg Pain Bojong and Kpg Rejoi, of which a total of estimated 1006 residents will be involved in a resettlement exercise. Apart from the socioeconomic issues arising from land acquisitions, relocation plans and land compensations; the environmental impact is no less drastic. A large chunk of the area, including some rich and exclusive flora and fauna will disappear along with the history of the community, once the inundation of the catchment area is completed.

Two hours after ‘civilization’, Kampung Taba Sait was the first village we encountered. Redan tactfully avoided telling us we were not yet halfway to our destination! As we continue our journey after 15 minutes rest, some of the scenery we came across on way to Rejoi was nothing less than spectacular – a walk above the clouds (a step above Keanu Reeves A Walk In The Clouds)! Mind you, although the six huge bamboo bridges and riverbed terrains below were scary I couldn’t help but marvel at the magnificent feat of engineering that was evident in the construction.

I later learned that the skills and knowledge needed to build and repair these bridges were going to be lost along with the older generation, as the younger generations no longer had an interest in learning the necessary skills.

As we trekked, Redan was very patient with our snail pace walk and constant rest breaks. Halfway there, it rained so heavily we were all soaked to our undergarments by the time we completed three quarters of the journey.

Due to our slow pace, our last hour was in the dark not to mention the rain! On the bridge crossings, Redan would go ahead of us and then shine his torchlight back so we could proceed further across the bridges. Then he would continue a little further while we waited frozen to our spots on the bridge, until he turned and again shone the light so we could continue walking. Crossing the last couple of bridges in this fashion was almost easier as we could hear the raging river below us, but couldn’t see it!!

After almost 5 hours of tiring, scary but interesting trekking by torchlight through the many different terrains, and across those scary bamboo bridges.. we arrived at Kampung Rejoi. It was almost 8pm. All dark and silent, the only sound came from the crickets and frogs. Redan led us into the teachers’ quarters at the school (SK Semban) and into the unit he shared with the school principal and another teacher. After a quick shower, by candlelight, our generous host prepared what Nancy calls the simplest but tastiest meal for bachelors/Borneo-style: instant noodles and black coffee! It was delicious!!

We all ate in the dark with a little light from the candle. As we were talking and sharing experiences I noted how the absence of electricity helped form a close connection between the teachers and the visitors. Conversation in the dark, by candlelight and mosquito coils formed a bond which would not have been there back in NY where each would have gone off in separate rooms to their computers, and cell phones! Why did we eat and shower by candlelight? Although the village and school compounds had generators and solar panels, they had stopped working some 6 months earlier. Due to the extreme hardship involved in getting to this area, coupled with the impending destruction of the village once the dam is completed, there is little motivation from the outside world to bring in people and supplies to make the necessary repairs. Only 1 building in the entire complex remains with electricity, in order to store the food and provide light for those staff members working late.

The next morning, we awoke with stiff muscles, and a note from Redan telling us to have the breakfast which he prepared and his apology for not being able to join us. (He teased Nancy about her inappropriate trekking shoes.. calling them “wedding shoes”)

After breakfast, we toured the village, stopping several times to chat with the local folks. We were invited into the tool shed to see 2 blacksmiths forging a parang (machete) using nothing but bamboo and manual strength, and lastly visited SK Semban.

We were graciously invited to join the teachers for lunch. We started our homebound journey at 2:30pm with another teacher Samsol Morshidi Bujang.

Going through the same route, we made it back to the Bengoh dam shortly before 7pm. Although we were better prepared psychologically for the trip, physically we were in worse shape as not having had time to recup from the previous night’s trip. We could barely walk by the time we reached the dam!

Although it was a tiring. thigh-busting, & nerve-wracking trip, it was also heart- warming and rewarding. We have no regrets of the experience knowing that we have visited a place which will be wiped from the planet all too soon.

In fact, for all the hardship, I plan another trip to Kampung Rejoi when I return to Borneo. And Nancy made the trip again Sunday 20, 2010 June with the teachers returning to school after the semester break. Joining them was a group of local, caring individuals who are involved in a grass roots effort to raise money to bring in much needed supplies to the villagers and school and make repairs on those amazing bamboo bridges. It has to be soon as paradise will make way for development by this time next year. As I write this, Nancy is shopping for 95 school children's toothbrushes, toothpaste & color pencils, to bring to Kpg Sait!

Please contact Jodi for more information and/or how to contribute to this worthwhile cause. junglejaunts@yahoo.com 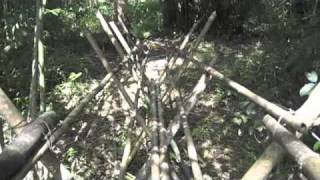